How are you going to translate the force produced from those strong legs to the arms? By utilizing the Serape effect of course!!!! 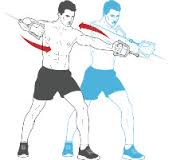 Imagine your body is made up of two big blocks of meat. You have your upper body and you have your lower body. Now imagine you want to use both of those big blocks of meat simultaneously to do something like throw/hit a ball, dig a hole or golf , push a cart full of groceries, or punch a heavy bag. How are you going to translate the force produced from those strong legs to the arms? By utilizing the Serape effect of course!!!! The Serape effect is basically the use of the core to translate force from the lower body through the arms. There are a variety of “functional” exercises that you can, and should, be doing to make sure you’re not overusing joints which can lead to injury. So now that you have a little background knowledge, let’s dive into today’s post!

The term “functional training” is a bit of a buzzword garbage term. My favorite quote regarding this is from James Fell that says “It’s meaningless. Any time someone says an exercise is functional it means they don’t know what they’re talking about. All exercises are functional. Your mom is functional.” Funny and true. All exercise has function, and a variety of exercise is important to maintain function. For instance, if you exclusively use exercise machines, you may lose the ability to use those strong muscles in a rotational fashion. That’s where the functional aspect of training the Serape comes in. Broadly, the core  can be described as being between the joints of the shoulders and hips.The muscles that attach the pelvis, spine, and rib cage perform many functions. Hip musculature generates the majority of power, then transfers it upward through the linkage to the arms through a “stiffened” core, which creates efficient transfer of forces, and is one of the keys to injury prevention. The Serape involves these features from both ends of the core in a spiral pattern (1). It actually wraps itself around the trunk of the body, perfectly designed for rotating the hips and shoulders in an opposite direction allowing the hips to lead and the shoulder to follow in many ground-based activities such as throwing, batting, golfing, or punching (2). Take a look at the pictures below and/or this video for a good visualization of how it works.

If you’re a nerd like me and want to know what exact muscles are involved, here are some pictures detailing the exact muscles used with the Serape.

Training the Serape muscles is easier than it looks. Yes, there are a lot of muscles involved. But remember, we are not isolating any single muscle in particular, we are learning how to use them all in an efficient manner. If you’re not doing so already, you will want to start doing Olympic-style lifts and traditional strength lifts such as squats, bench press, and pull-ups. These are non Serape specific exercises, but if you don’t have strength in the upper and lower body then you won’t have strength to translate through the core to begin with! You will also want to start by training the four basic trunk movement patterns with dynamic and/or static exercises. Beginners should do exercises that train in what we call single-plane basic movement patterns. Single-plane exercises are usually easy to learn and include exercises such as the crunch (trunk flexion), back extension/hyper-extension (trunk extension), Russian twist (trunk rotation), and side bend (lateral flexion) (3).

For those more advanced, you may want to consider multi-plane exercises that target areas you’re not getting with your standard training. This is because there is huge inter-personal variety in terms of which ab-exercises work best for whom (4). By simply extending your arms over your head during a crunch, you can drastically increase abdominal muscle involvement. Take a look at the chart below to get an idea of what exercises work for different parts of the core (the lower the number the better). Before we move on to the last section of this post, I think it’s important to note that any exercise performed for abs will always use all the muscle groups that compose the abdominal wall when done correctly. Proper technique is paramount to all exercise, so make sure that you consult a professional if you are a novice, are unsure of what you’re doing, or experience pain during exercise.

While it’s been long proven that abdominal exercises won’t turn a beer belly into a six pack, we do know that core exercises are paramount for a healthy body and for safety during exercises that will get you strong and help you lose weight (5). Core stiffness enhances athletic performance, and guess what your doing at the gym?… performing athletically (6)! So once you have set the foundation of a strong body, you can get into the fun exercises that greatly enhance your athletic performance on and off the playing field, (aka daily life activities). Here are some of the best ways to train the Serape movement pattern:

I’ll finish up by reminding you of why we are working on the core and Serape. Muscles of the Serape form a spiraling system that enhances the efficiency of cyclic activity such as walking, together with power and speed activities such as throwing and golf. The stiffened core enables power produced in the lower limbs to transfer to the joints of the upper end of the core (or vice versa) forming a whip. So get of those machines and start whipping yourself into shape!

The name of the blog is "All Me Fitness" because I want you to be able to take control of your own health and fitness journey. So check out some of my past post and check in every Monday and Thursday for a new one!
Follow All Me Fitness on WordPress.com

I've been called many things in my life, but "doctor" is not one of them. This means that nothing that you read here should be taken as specific medical advice. It also means that I don't have a Ph. D in English so there will probably be some writing errors here and there. Please keep that in mind when leaving comments.
%d bloggers like this: